For most adults, these events are etched in our brains. But students today are too young to remember the attacks. So you'll have to decide how much to share with them. You might choose to discuss the terror attacks and their impact, or simply deliver a lesson on heroism. (Follow these guidelines for talking with young…  learn more

In New York and at the Pentagon, the National Archives offered help to assess records damage, stabilize damaged records, and reconstruct files if possible. Here, however, we are reprinting a piece that is close to home for the agency: for the first time on National Archives News, we are publishing the firsthand account from staff at…  learn more

The 9/11 Memorial & Museum offers interactive lesson plans for students in grades 3 to 12 that address the 9/11 attacks, their ongoing repercussions, and the history of the World Trade Center. Lessons plans are divided by grade level and theme below.  learn more

Americans remembered 9/11 on Sunday with tear-choked tributes, and pleas to "never forget," 21 years after the deadliest terror attack on U.S. soil.  learn more

Teaching 9/11 in the classroom can be challenging and providing age-appropriate resources will help deepen your students' understanding and develop their critical thinking skills. Use these free articles, videos and lesson plans from Scholastic Magazines+ to help you approach this difficult topic with your students.  learn more

A common field one day.  A field of honor forever. On Tuesday morning, September 11, 2001, the U.S. came under attack when four commercial airliners were hijacked and used to strike targets on the ground. Nearly 3,000 people tragically lost their lives. Because of the actions of the 40 passengers and crew aboard one of…  learn more 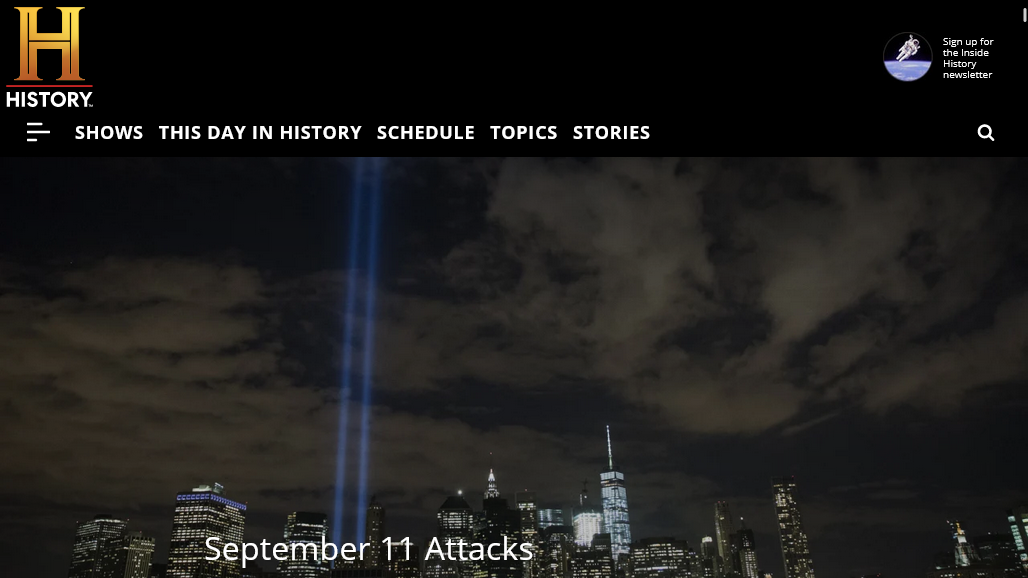 On September 11, 2001, 19 militants associated with the Islamic extremist group al Qaeda hijacked four airplanes and carried out suicide attacks against targets in the United States. Two of the planes were flown into the twin towers of the World Trade Center in New York City, a third plane hit the Pentagon in Arlington,…  learn more

Today in History ordinarily presents events that happened at least twenty-five years in the past, but this day is an exception. Within hours of the terrorist attacks of September 11, 2001, Library of Congress staff began to call for and collect a vast array of original materials concerning the attacks on the World Trade Center towers and the Pentagon,…  learn more

The 9/11 Memorial Stair Climbs are not timed race events, but a way for firefighters and the community to honor and remember the FDNY firefighters who selflessly gave their lives so that others might live.  learn more

Smithsonian's History Explorer. While many young children have heard references to "9/11" or "September 11," they may not have accurate answers to all of their questions about the events of September 11, 2001. The goal of these activities is to provide a starting point to help families and classrooms discuss the shocking events of September…  learn more

Nearly 3,000 people died on the day of a series of coordinated attacks against the United States by terrorists who hijacked four passenger jets that crashed into the World Trade Center buildings in New York, the Pentagon and a field in rural Pennsylvania. Smoke rises from the World Trade Center in the Manhattan borough of…  learn more 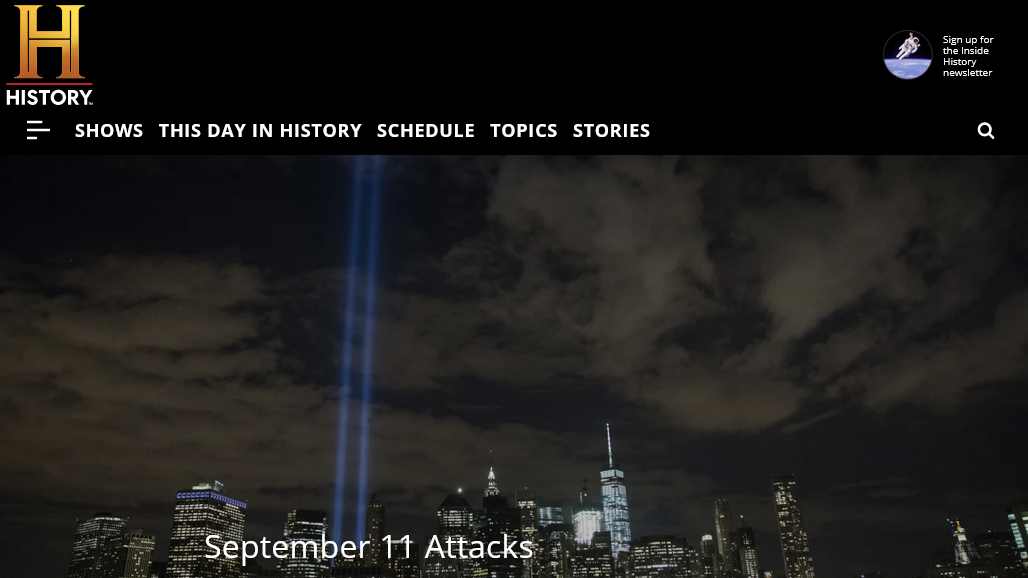 On September 11, 2001, 19 militants associated with the Islamic extremist group al Qaeda hijacked four airplanes and carried out suicide attacks against targets in the United States. Two of the planes were flown into the twin towers of the World Trade Center in New York City, a third plane hit the Pentagon in Arlington,…  learn more

September 11: A Day of Remembrance and Service

Join us for a day of remembrance by visiting a national park or following the September 11 Observation at Flight 93 National Memorial. Or participate in the national 9/11 Day of Service by volunteering at national parks throughout the country.  learn more 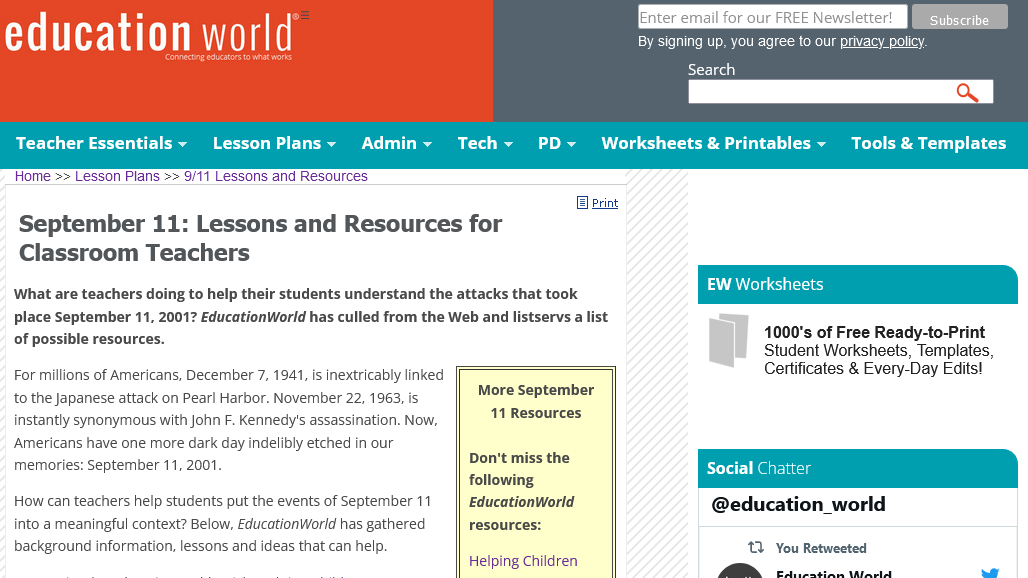 Education World presents Remembering September 11, which includes five new lessons to help teachers reflect upon the September 11, 2001, attack on the United States. Those lessons keep alive the spirit of patriotism and tolerance stimulated by the events of 9/11. We also offer below a long list of online lessons and other resources to help…  learn more

For many, images of the towers in New York crumbling into a mountain of debris, or the sight of black smoke billowing from the Pentagon, a symbol of America’s military strength, may conjure up memories like it was yesterday -- especially for those who lived every minute of the attack.  Thomas Brading, Army News Service,…  learn more

Global Game Changers received a three-year AmeriCorps 9/11 Day of Service Federal Grant to develop a unique educational experience and lessons to fulfill our project vision and mission. Vision: That all elementary students across the country will learn about the significance of the events of 9/11 and the real-life superheroes who responded, and in their…  learn more 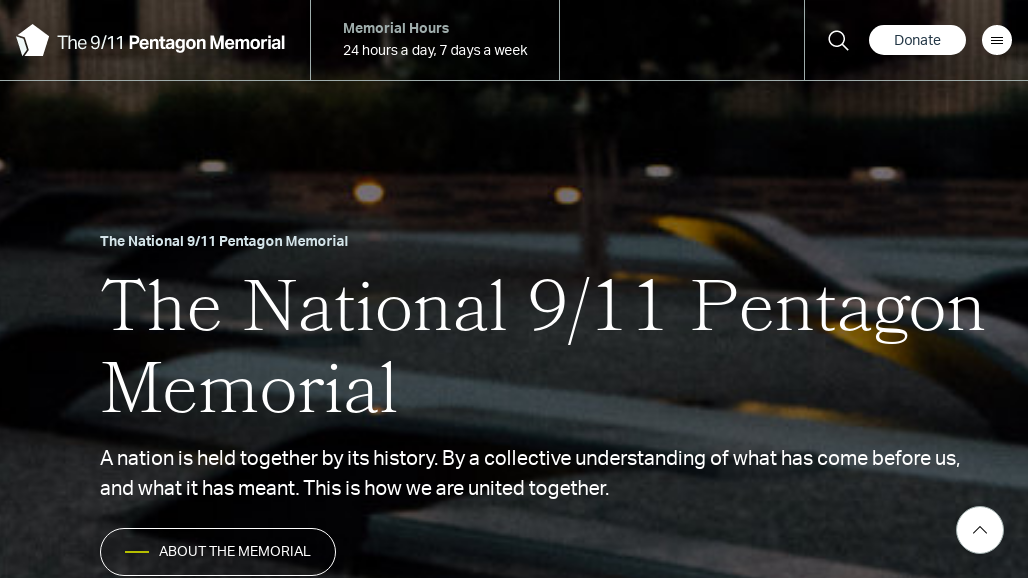 The Pentagon Memorial captures that moment in time at 9:37 a.m. when 184 lives became intertwined for eternity.  Each victim’s age and location at the time of the attack have been permanently inscribed into the Memorial by the unique placement and direction of each of the 184 Memorial Units.  learn more

Naval History and Heritage Command On the morning of 11 September 2001, 19 terrorists from the Islamist extreme group al Qaeda hijacked four commercial aircraft and crashed two of them into the North and South Towers of the World Trade Center complex in New York City. A third plane crashed into the Pentagon in Arlington,…  learn more

On September 11, 2001, 2,977 people were killed in the deadliest terrorist attacks in American history. The moment shocked the nation. The 9/11 attacks were the deadliest on American soil since the shock attack at Pearl Harbor 60 years before, and the sense of outrage was reminiscent of that moment.  learn more 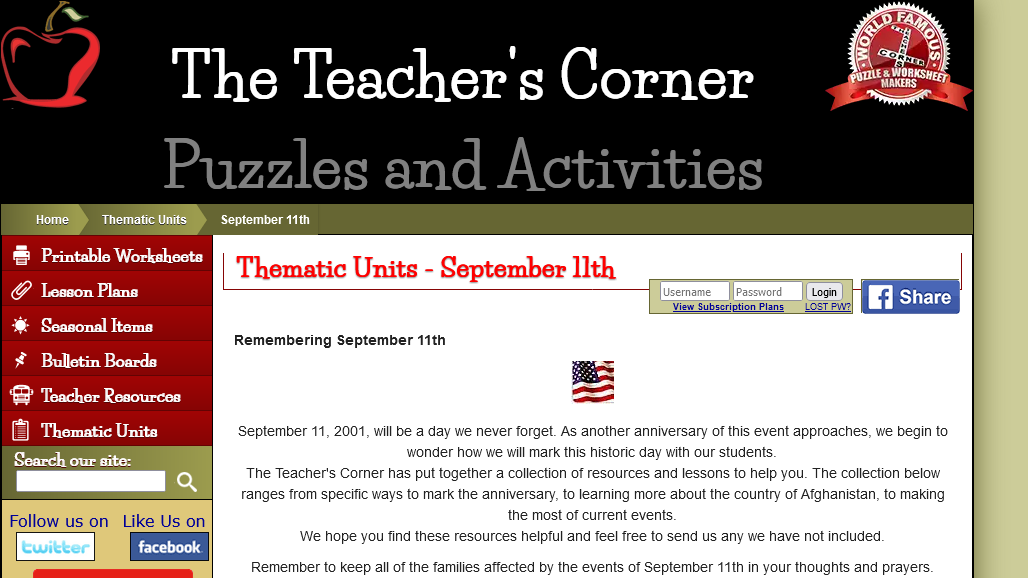 The Teacher's Corner has put together a collection of resources and lessons to help you. The collection below ranges from specific ways to mark the anniversary, to learning more about the country of Afghanistan, to making the most of current events.  learn more

Twenty Years Later: We Remember and Honor Those Who Responded

In 2021, we marked the 20th anniversary of the Sept. 11, 2001 terrorist attacks. We remember the sorrow of that day but also the dedication, commitment and strength of those who responded to the tragic events. We reached out to FEMA staff across the country to collect the stories and first-hand experiences of those who…  learn more

A review of U.S. public opinion in the two decades since 9/11 reveals how a badly shaken nation came together, briefly, in a spirit of sadness and patriotism; how the public initially rallied behind the wars in Afghanistan and Iraq, though support waned over time; and how Americans viewed the threat of terrorism at home…  learn more 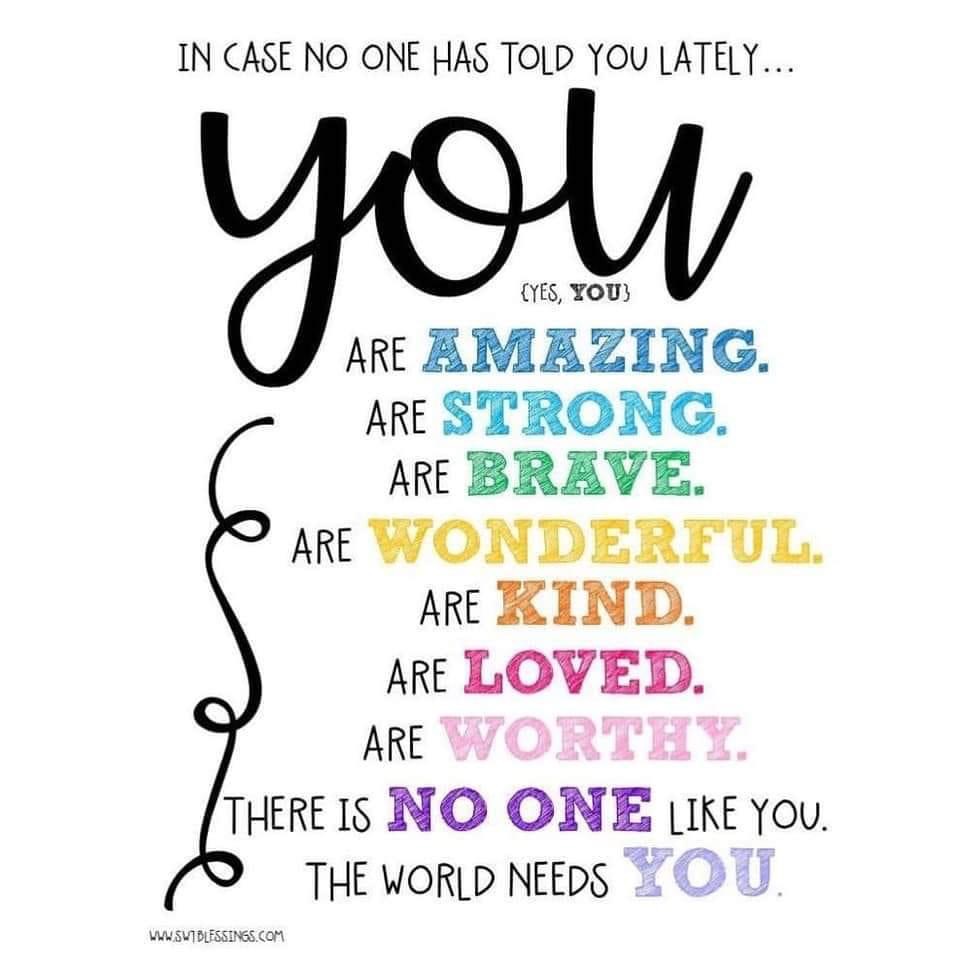